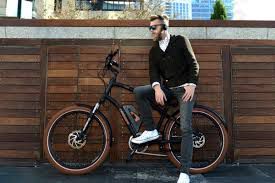 Today, I am deciding to tackle, what is likely to be quite a controversial subject. That is, are you REALLY getting a better e-bike, worth the extra money, when you are paying for a more widely recognized brand ?

Particularly, when these brands are pricing e-bikes in the range of $2500 to $4000 ? Of course there are e-bikes that sell for well over $4000, and even as high as $12,000, just like you can spend some really big bucks on a regular performance bike. $4000 to $12000 is pretty crazy money for what's still a bike with 2 wheels, but I realize some people do have that sort of extra expendable cash.

Personally, I prefer to cater to the frugal, common sense minded consumer, such as a Costco type consumer who appreciates quality and a good value.

To start off, I am going to mention who those more widely recognized brands are: EasyMotion, Pedego, Haibike, Stromer, Bulls, Faraday, IZip, Trek, and Prodecotech. These brands are not necessarily better than the lesser known brands. And don't get me wrong, these are not bad e-bikes. Nice names, nice vendors, nice variety, and interesting branding.

But from what I have researched in becoming a specialized e-bike dealer, and in a number of years of following this industry, is that mostly there is only very modest and slightly incremental improvement when you are paying for an e-bike from one of these brands, that is priced between $2500 and $4000, versus other lesser known brands where their e-bikes are priced between $1500 and $2500 with virtually the same quality of components.

Below $1500, the quality gets really dicey, as you simply cannot build an e-bike, and sell it through a contract manufacturer, and a dealer, or even on-line for anything less than $1200, and expect it to have components such as higher end batteries from Samsung, better quality motors, the better quality drive trains from Shimano or SRAM, and solid quality disc brakes, and a robust frame/battery integration.

So what accounts for most of the difference for the pricing between the recognized brands, and say lesser known brands like Magnum, Blix, Surface 604, Rad Rover, Evelo, Juiced, and others ?

Well most of that difference is in the profit margin those name brands seek, their overhead costs including heavy marketing expenses, high G&A, higher rents and larger facilities, and the pricing structure through their dealer networks.

Margins on regular non-motorized bikes are notoriously thin, and regular Independent Bike Dealers dealers operate at very low margins, and are lucky to get after all costs of operations, more than a 4% net profit. And that includes their higher profit operations such as service, and the accessories, where they can 'keystone' and make up for the low margin on actual bikes. That is part of the reason the IBD's have dropped in numbers from over 6000 stores in the US in the year 2000, to less than 3800 stores in 2017. E-Bikes OEM's such as the name brands mentioned above, have generally made the same exact mistake as the rest of the bike industry, thinking they can give dealers only a 28% to 32% gross margin, and believe that dealer will be able to survive. (good luck with that one.)

Where that affects you when you are buying from one of the more recognized brands is that you are effectively paying $1000 to $2500 more when you are buying an e-bike priced between $2500 and $4000, for only very marginal improvement in component quality. It's the dirty secret of the e-Bike world, when you closely examine actual costs to make these e-bikes, and what you can buy the components at in a whole-sale factory direct situation. Of course there is the claim, that someone like a Pedego, or EasyMotion, could be around longer, but there is simply no guarantee of that. Trek might have staying power, but they could easily just drop their very small e-bike line at any moment, as they did at least once before in the 2010 to 2013 time frame. Just look at the example of Schwinn, which was a huge name in bikes, and has now been reduced to name only and is a contract OEM under the Pacific Cycle name, a former shell of the original Schwinn, who's quality amounts to very low margin Big Box store type of bikes. (i.e. Walmart, Target, Sears, etc.)

So when some e-bike dealer gives you a 'deal' on those e-bikes priced in that range, he is certainly cutting his margin to razor thin, and certainly taking advantage of other infrequent deals from the OEM, but that still doesn't translate to necessarily getting a much better e-bike. In fact, you may be buying from someone that is discounting so heavily, that he or she is unlikely to be around for very long. It happens especially when that e-bike dealer takes an appliance salesman's approach to selling. "Hey, I have such a deal for YOU !". The more often that e-bike dealer has sales, and 'huge' discounts, the more scrutiny and common sense you need to apply, on whether you are getting 'such a deal.' If price is your primary motivation when seeking 'that deal', then likely you will end up with an e-bike that was way over-priced to begin with, and not really such a great deal vs the value of the e-bike.

My suggestion for what its worth ? Do your homework, ask hard questions, don't just listen to common reviews from places who only give a minimum score of '7' out of 10, on 90% of their reviews, and think more about buying very locally from someone with good service that is near you: a dealer who is really educating you, someone who is professional and courteous ( as opposed to a high pressure pitch) and think seriously on your very first e-bike purchase about staying within a reasonable budget of $1500 to $2400. That way you limit your risk, can still get fairly good quality, great service, and more importantly, you aren't subsidizing more widely recognized name brands who are spending too heavily on marketing just to grab market share, but don't necessarily give you a much better e-bike for your money.

Another option to consider to keep you in that initial modest price range, and to test out if you really will want an e-bike for the longer term (while deriving the value and joy of what you are spending for it) is to consider an electric conversion kit installed for you on your existing bike. Then after a few years, and hopefully finding that you really do enjoy it, you realize that it does get you out more often, and that you get a lot of physical benefit, you can graduate to an OEM made e-bike.

You are likely to buy a better e-bike in a few years with a much better fit that is for your e-biking needs (which could be a lot different than you would have ever considered for the use of a regular bike). Especially after you learn what's important in e-bikes, and how you end up using it more regularly, for different types of trips, or different methods of riding for health reasons.

Notably too, e-bike technology continues to improve on a pace that is typical with an early emerging market product, and pricing is likely to continue to drop for batteries and other electronic components, lighter weight designs will come, along with more user options emerging as these manufacturers learn how to navigate this business. Remember, that all of the e-Bike OEM's and dealers, are still very new to the US market for e-bikes, and the market itself remains rather low in terms of numbers of total sales. Call it "a niche, of a niche" of the regular bike market at this current time with less than 200,000 units sold annually.